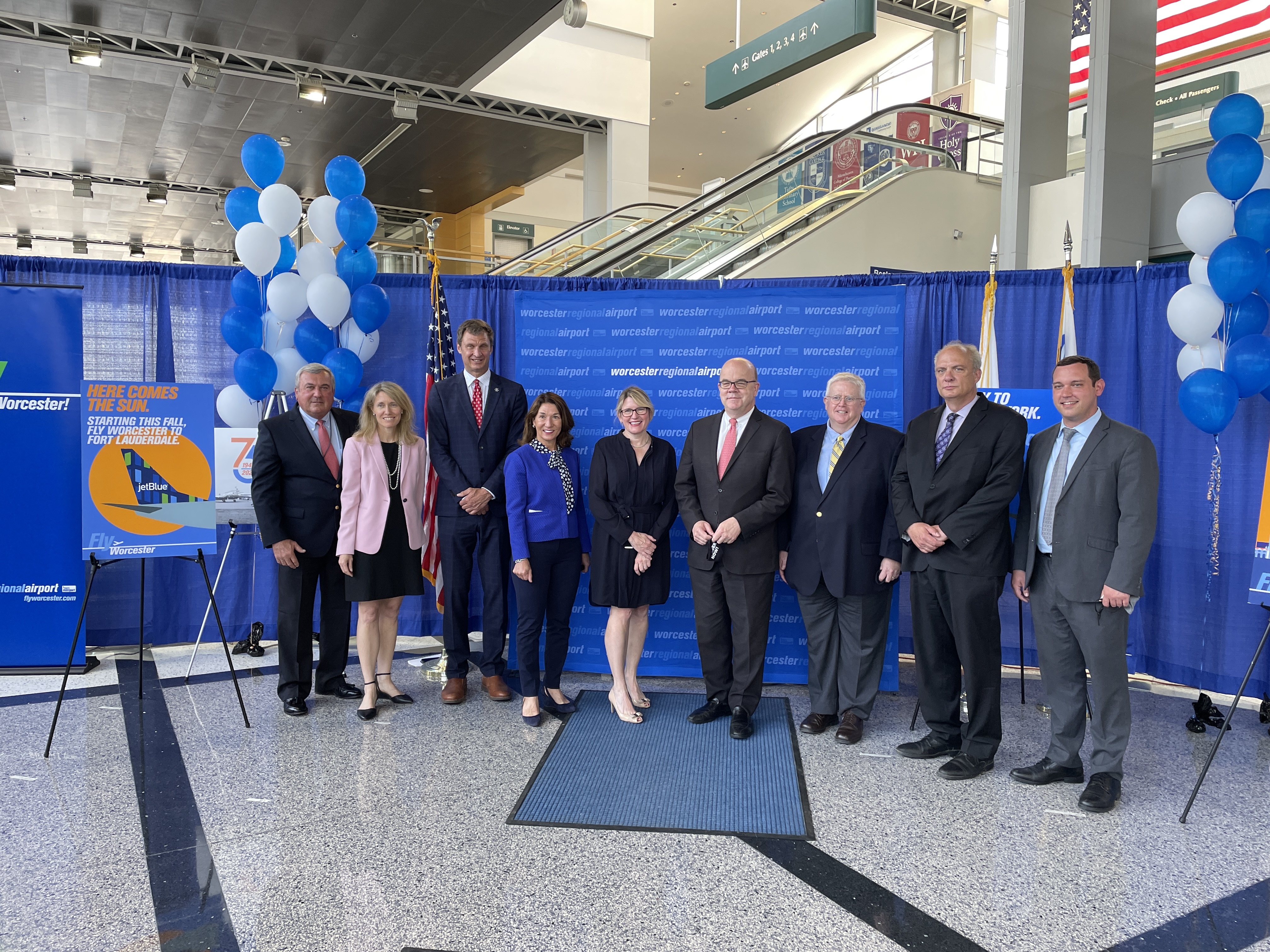 Daily flights to NY begin this summer, FL this fall

WORCESTER – The Massachusetts Port Authority (Massport) and JetBlue are pleased to announce the restart of the daily, nonstop service between Worcester Regional Airport (ORH) and New York’s John F. Kennedy International Airport (JFK) this August. A second daily flight will be added to JFK, as well as daily, nonstop service between Worcester and Ft. Lauderdale-Hollywood International Airport (FLL) in October. JetBlue is the first commercial airline to resume service at Worcester Regional, which is marking its 75th anniversary this year.

“While the pandemic stalled air travel here in Worcester and across the country, today’s announcement from JetBlue is a clear indication that Worcester Regional Airport is open for business and on the rebound,” said Congressman McGovern. “Great cities thrive on great airports. They connect us to the world and unlock unlimited new potential for our entire region. That’s why Congress stepped up to provide help for airports like Worcester Regional through Coronavirus relief legislation – and it’s why Massport continued to make major investments in ORH even during the pandemic. I am positively thrilled to welcome JetBlue back to Worcester Regional Airport.”

“Our administration is pleased to celebrate the return of commercial air service to Worcester Regional Airport,” said Lt. Governor Karyn Polito. “We are grateful to Massport and JetBlue for their partnership in making this announcement possible, and look forward to the airport playing a key role in supporting economic recovery and growth across the region in the years to come.”

“Our resumption of service in Worcester is just another example of JetBlue’s ongoing commitment to customers in the community and Central Massachusetts,” said Joanna Geraghty, president and chief operating officer, JetBlue. “We are thrilled to bring back our low fares and award-winning service to these new routes, and connect more travelers to JetBlue’s growing network in the Americas and beyond.”

Ft. Lauderdale-Hollywood is also a focus city for JetBlue, providing connections to dozens of domestic and international destinations, including to Latin America and the Caribbean. Tickets are now on sale for the daily, nonstop service between Worcester and Ft. Lauderdale-Hollywood, which begins October 21st. The schedule will be as follows:

“Whether you’re traveling for work, on vacation with family, or on a college trip, Worcester Regional Airport should be your starting point,” said Worcester County Sheriff and Massport Board Chairman Lew Evangelidis. “We are delighted to welcome JetBlue back to Worcester on the airport’s 75th anniversary. Just like Massport, they are committed to serving New England’s second largest city and surrounding communities and helping the region’s economy move again.”

“We are excited to welcome JetBlue back to Worcester Regional Airport, offering travelers from Central Massachusetts convenient flights to New York and Ft. Lauderdale, with connections to dozens of destinations just one stop away,” said Massport CEO Lisa Wieland. “Even in the middle of the pandemic, Massport continued to invest in ORH with renovations to a major runway, to ensure the airport supports economic development in this region.”

In May 1946, the airport formerly known as Worcester Municipal Airport was approved by the Massachusetts Aeronautics Commission to provide commercial air service. Over the years, the airport on top of Tatnuck Hill has transformed and grown. Since Massport took ownership of the airport in 2010, the Authority has invested more than more than $100 million in improvements, including in a Category III Instrument Landing System, completed in 2018. Two new jet bridges were installed in 2019, doubling the number to 4. And in 2020, Massport took advantage of the reduced passenger activity to resurface half of the airport’s primary runway and install energy-efficient LED runway signs using FAA funding. These investments will allow ORH to accommodate more flights and serve more passengers in the future.

“The Worcester Regional Airport is an economic engine and an important service for our city and our region. We appreciate the steadfast commitment of MassPort and JetBlue in restoring service after an extremely difficult year. We look forward to the bright days ahead for the airport, travel and tourism for our region.” City Manager Edward M. Augustus, Jr.

“I want to thank Massport, Jet Blue, and the Baker administration for their commitment to Worcester Airport,” said Mayor Joseph M. Petty. “This continuation of service is part of getting back to normal and business as usual here in Worcester. Flights from Worcester to New York City and Fort Lauderdale offer a convenient and affordable option for people from all over New England to see the world.”